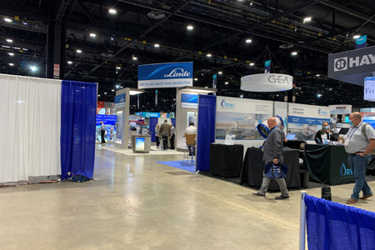 As the new WNBA champion Chicago Sky enjoyed their well-earned victory parade around the city of Chicago recently, another band of warriors masked up and ventured into the WEFTEC arena for the first time in person since 2019. Despite all the stops and starts in the run up to the Conference, the COVID-19 precautions in place restricting attendance to the vaccinated and the nail-biting decisions of many an exhibitor on whether to exhibit or not, there were plenty of familiar faces to catch up with on the state of our industry.

Cautious optimism was on the rise regarding the federal funding working its way through the halls of Congress. There was a general feeling that something is going to happen and whatever that might be, it’s not going to hurt getting some delayed projects back on track or indeed funding some new ones.

The bigger challenge for many solution providers we spoke to remains the slow adoption of new approaches and innovation. In an industry that lives on the “tried and true,” it remains very difficult to move engineering consultants from specifying and designing in what they’ve worked with in the past to championing a new approach. There’s an implied risk with a new biological treatment system. Engineers understandably want data and installation examples, and understandably lots of it, before being willing to even consider a new technology.

New innovative technology can also require regulatory change which can take years and quite easily kills a new approach before it can get on to a skid. The old adage about winery owners purchasing a vineyard to lose a fortune resonates with water innovators too. Many exhibitors talked to the long game that you have to be financially capable of staying in to get your technology over the regulatory hurdles it faces.

But there’s also the industry-wide hurdle of time. Engineers and utility personnel are busier than ever as a generation of industry professionals retire and responsibilities get shared out across existing staff and new contaminants such as PFAS move closer to regulatory standards requiring a greater volume of design specs. As Transcend Water has recognized, the design work required to simply bid on jobs is onerous. No wonder engineers opt to keep it simple and return to the specs that they’ve used on previous jobs to win others. Copy and paste. Copy … and paste.

With limited time available to get the metaphorical toe-in-the-door, savvy innovators are turning to digital communication techniques to cast their net far wider than their rep networks have been able to take them in the past. The one-on-one relationship-based influence that a rep can effect with an existing customer or partner is second to none. But webinars, virtual panels, challenge-addressing content delivered via email to cellphones and laptops worldwide is proving critical to catch audience attention in the moment they have the inclination to think differently about a problem. When that engineer or utility manager pauses and turns to a Google search to research the issue they’re experiencing, that’s when your new approach needs to show up. What content do you have to do that?